The IEEE 1588 PTP standards provide a wealth of options and the basis for highly reliable and accurate time synchronization solutions. However, the time synchronization needs of specific applications in different industries can vary quite significantly. These specific needs are defined in separate PTP profile standards, often in collaboration with other industry standards organizations.

For 5G, both IEEE and ITU-T provide relevant profiles that can be used to design ultra-reliable and highly accurate time synchronization solutions. These can be seen in Figure 1.

G.8265.1 provides frequency synchronization in Frequency Division Duplex (FDD) mobile networks where phase synchronization is not as critical. Only PTP ordinary clocks are defined with transport of unicast PTP packets over IPv4/IPv6 networks. The PTP performance is dependent on the network implementation.

For applications that need frequency synchronization over IPv4/IPv6, it is recommended to use the G.8275.2 profile going forward.

For 5G networks based on Time Division Duplex (TDD), G.8275.1 is the recommended profile to be used, but requires that all switching nodes in the network can operate as PTP Telecom Boundary Clocks (T-BCs). This means that each device has to support its own high-performance oscillator (e.g. an OXCO) and timing logic that will allow the termination and regeneration of PTP packets. It also means that each device must support Synchronous Ethernet or a similar physical layer frequency synchronization input that can meet requirements. Tests have shown that it is very difficult to meet end-to-end time error requirements without a physical layer synchronization input [1].

There are many circumstances where the requirements of G.8275.1 cannot be met. This can be because parts of the network include switches and routers that cannot support PTP or Synchronous Ethernet input. In these circumstances, G.8275.2 can be used to provide the best time synchronization possible.

The G.8275.1 profile is designed to provide the most accurate time synchronization solution within the timing budget constraints of +/-1.5µs from the Primary Reference Time Clock (PRTC) to the antenna outlined in the ITU-T standard G.8271.1, “Network limits for time synchronization in packet networks with full timing support from the network”. The PRTC is a reliable source of phase, frequency and time, such as Global Navigation Satellite Systems (GNSS).

To meet the requirement of +/-1.5µs, G.8275.1 specifies that only T-BC clocks are used, which means there is only one hop between each T-BC reducing the impact of buffering in each device leading to packet delay variation.

To achieve this kind of performance, G.8275.1 stipulates that the network physical layer provides a suitable frequency synchronization input at each T-BC allowing each boundary clock to be synchronized, or to be more precise, to allow the clocks to be syntonized.

This can be achieved using Synchronous Ethernet at the physical layer. The combination of Synchronous Ethernet input and regeneration of PTP timing at each node enables a highly accurate time synchronization across multiple hops in the network while meeting the tight end-to-end accuracy budget. The quality of the T-BC clocks will determine the number of hops that can be tolerated.

One of the disadvantages of G.8275.1 is that every node has to support a T-BC with a certain level of accuracy requiring a physical layer frequency synchronization input. This is not always possible and therefore an alternative solution is needed.

To achieve acceptable accuracy, T-BC-Ps are installed at strategic points in the network.

While not as accurate as G.8275.1, G.8275.2 addresses real-world issues with respect to re-use of existing network installations and network sharing that mobile operators need to address. Real-world deployments of 5G can often involve traversing multiple networks owned by different operators, which might or might not offer a time synchronization service. G.8275.2 therefore provides some flexibility in delivering time synchronization over multiple networks.

G.8275.2 can also be used as an alternative to G.8265.1, which also delivers unicast PTP packets over IPv4/IPv6 networks, but only supports ordinary clocks. G.8275.2 provides a more flexible and potentially more accurate solution than G.8265.1 for the same use cases.

Ethernet TSN encompasses many IEEE standards but from a time synchronization point of view, the relevant standards are IEEE 802.1AS, IEEE 802.1CM and the recent update IEEE 802.1CMde.

IEEE 802.1AS defines a different profile for PTP otherwise known as “generalized” or gPTP that has recently been updated. It is similar to ITU-T telecom profiles in being based on layer 2 multicast. Instead of referring to ordinary clocks, boundary clocks and transparent clocks, IEEE 802.1AS refers to time-aware bridges and time-aware end-stations. A time-aware bridge is similar to a boundary clock, but where its operation is tightly defined so that it operates more like a transparent clock.

Only time-aware devices are allowed in the network allowing a peer-delay mechanism to be used. Each port on a PTP device sends a peer delay request message to the port it is directly connected to. The connected port then responds with a peer delay response message. The requesting port finally stores the propagation delay measured between the 2 ports.

IEEE 802.1CM is an Ethernet TSN profile for Time-Sensitive Networking for mobile Fronthaul networks including 5G. From a time-synchronization perspective, IEEE 802.1CM assumes the use of IEEE 802.1AS and includes latency requirements that are important to consider. The requirements are closely aligned with ITU-T specifications for network limits for time synchronization in packet networks with full timing (G.8271.1), which means that Synchronous Ethernet physical layer frequency synchronization is also required in this standard.

G.8271.1 was updated in March of 2020 with new timing requirements for fronthaul networks. IEEE 802.1CMde is a recently released update to 802.1CM that takes these new requirements into account.

Building a solution that can meet the stringent requirements of ITU-T and IEEE PTP standards has become a major challenge. The requirements for extreme levels of accuracy and precision demand high-resolution implementations with expert knowledge of both software and hardware.

Comcores PTP Intellectual Property (IP) provides a reliable implementation that accelerates the development of mobile devices like Radio Units (RUs), Centralized Units (CUs) and Distributed Units (DUs), as well as other mobile routing and switching devices. 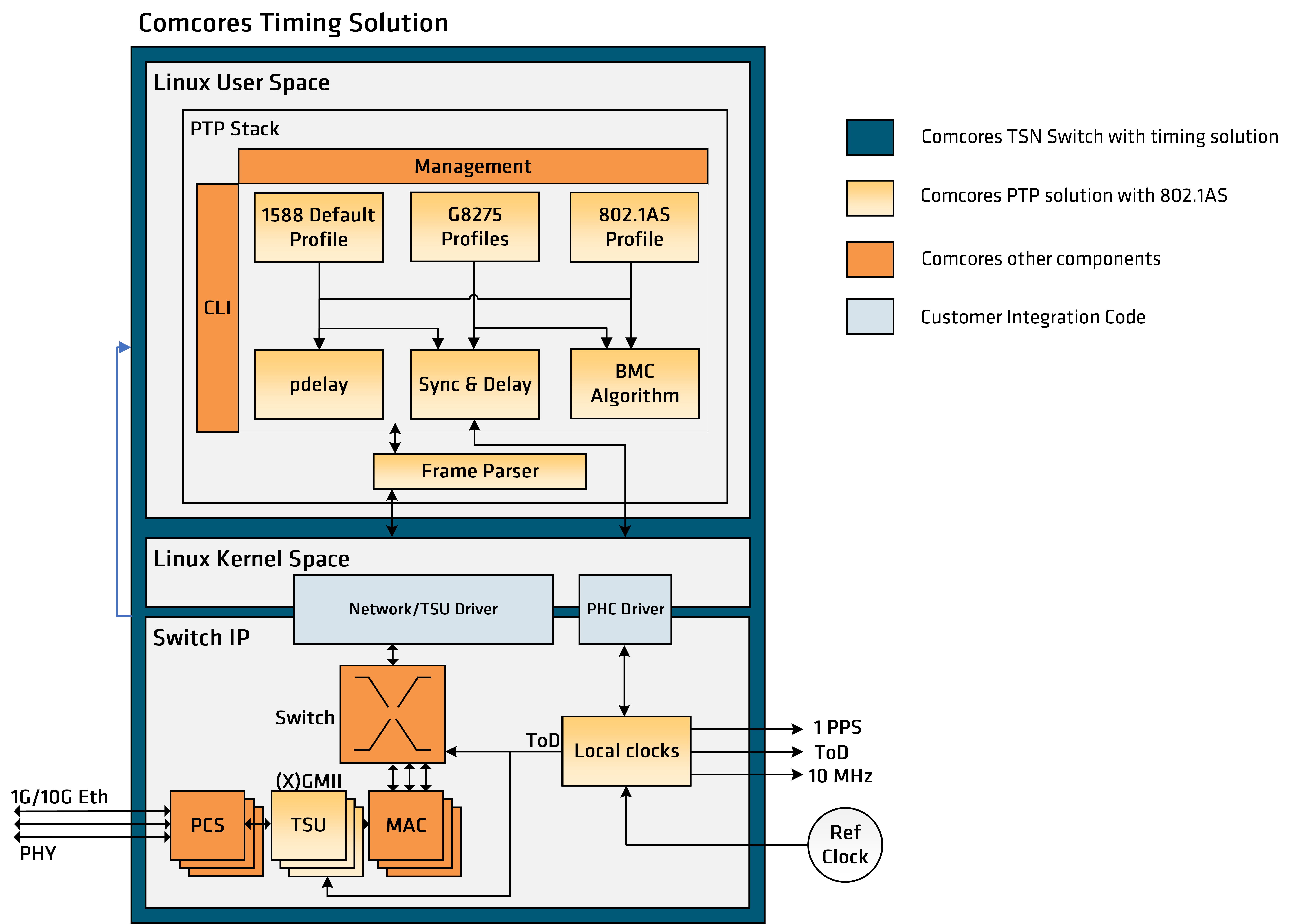 The Comcores IEEE 1588 PTP IP implementation is highly configurable and easy to use making it ideal for integration into mobile device development projects. The IP is implemented in VHDL and can be used in any RTL implementation, like ASICs and FPGAs while the software stack is implemented in C++. This enables the IP to be configured for multiple operating modes supporting different PTP profiles.

Point-to-point latency is automatically calculated and the solution also provides programmable eMAC and PHY ingress and egress latency compensation. The IP is pre-integrated with Comcores´ own Ethernet MAC and PCS and can be easily integrated with other MAC/PCS implementations. 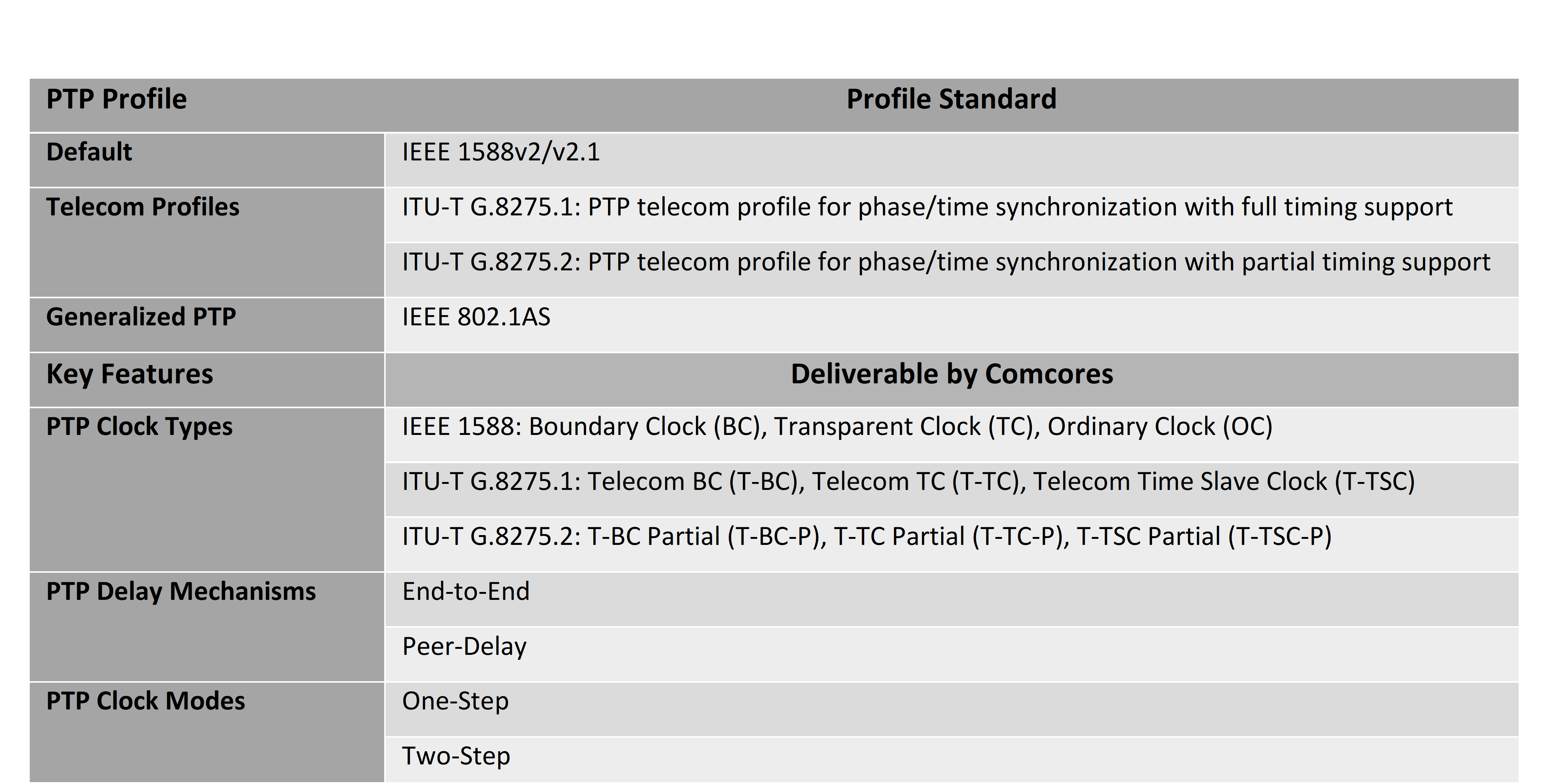 Figure 3: PTP Profile implementations that can be delivered by Comcores

To enable customer-friendly implementation, a 5G-ready Ethernet sub-system is provided by Comcores that includes pre-integrated Ethernet MAC, PCS, and PTP IP as well as supporting PTP software. The implementation is proven in O-RAN O-RU solutions and has been tested with Intel® FlexRAN O-DUs on a system-wide scale. This has provided valuable experience and insight on how to ensure successful deployment of state-of-the-art PTP time synchronization solutions for 5G fronthaul networks.

For more information on Comcores IP solutions contact us at sales@comcores.com.