Way back in the early 2000’s when XAUI was falling short on link flexibility a search for an alternative chip-to-chip data transfer interface with SPI like features, lead Cisco Systems and Cortina System to put forward the proposal for the Interlaken standard. The new standard married the best of XAUI’s serialized data and SPI’s flow control capabilities. To this day the continuous growth in data consumption is driving demand for higher speeds, but also lower power-per-bit equating to lower cost-per-bit. Reliability is, of course, also a key requirement. Fortunately, ongoing developments and extensions to the Interlaken Standard allow it to continue to be up to the challenge of current times high bandwidth links. Interlaken has found its way into Applications involving HPC (High Performance Computing), Telecommunications, Data Center NPUs (Networking Processing Units), Traffic Management, Switch Fabrics, TCAMs (Ternary Content Addressable Memories) as well as Serial Memories. 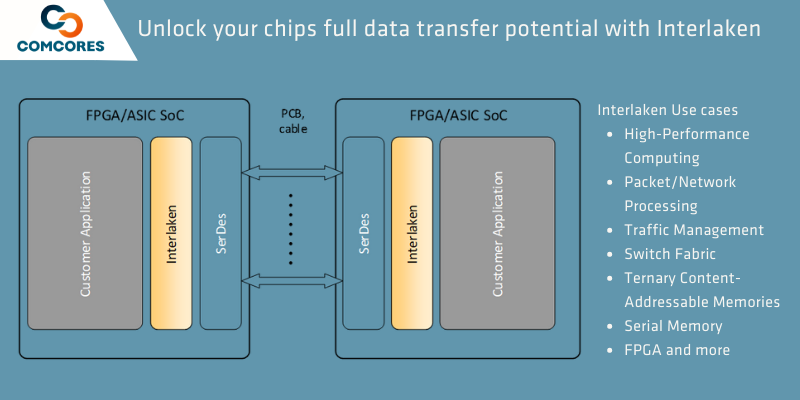 Interlaken Operates on packeted data allowing for multiple logical channels to share a common set of High-speed lanes. The data rates on the logical channels can vary which allows for mixing high-speed high throughput data sources with sparsely transmitting occasional usage sources over a shared set of physical lanes. This paired together with rate matching and flow control mechanisms allow for an extremely flexible interface from the perspective of link sharing and data mapping. Data packets can be interleaved such that large packets do not block the link, allowing to balance of the transmission between multiple channels or giving priority to urgent control packets.

Data Integrity and Reliability are achieved with multiple levels of CRC based Error Detection as well as the RS-FEC based Error Correction capabilities. The RS FEC error correction mechanism has been introduced in 2016 as an extension of the standard to address the high BER (bit error rates) of PAM4 links. In case an error occurs, the Retransmit extension from 2010 allows the standard to handle the situation without involving the upper control layers. In this situation the Out of Bound Flow Control interface will be used to request the Transmitter to retransmit data from its internal buffer, to allow for the RX to pick up the data stream at the point the error has been detected and resolve the error.

Other extensions to the interface include the Dual Calendar Extension from 2014, and the Look Aside Extension from 2008. The Dual Calendar allows the addition and removal of channels or change channel priority during operation. Examples of use cases would be for Online Insertion or Removal (OIR) of interfaces or possibly for dynamic re-provisioning of channel bandwidth. The Look Aside Extension defines a lightweight, alternative version of the standard, to facilitate interoperability between a data path device and a look-aside co-processor. It is suitable for short, transaction-related transfers and since it is not directly compatible with Interlaken it should be considered a different operational mode.

You can watch the webinar on demand to learn more about the Interlaken IP and find out how it can help you unlock your chips full data throughput potential.